Back in the 1930’s (and for some time before that) the area at the end of Bowden Lane, adjacent to the old railway line was a marshy area that, because of the natural springs, was utilised as Watercress beds. Over time, due to changes in the topography and a reduction in demand the area became a dark, muddy part of the Back Stream that had a strange bubbling spring in the middle of it.

This made it a very poor place for wildlife and not exactly the most aspiring place for anyone to stop and admire the stream. The Back Stream is on one side which is a muddy patch with a great big sewage pipe running over the top of it. Walk a few feet to the other side of the path and you can see a very shady, straightened concrete lined section of the River Wye and watch the ‘clean sewage water’ being returned back to the river, so we set about working out what we could do about it.

We created a plan based on the fruits of our labour only a few metres further upstream (adjacent to Funges Meadow Nature Reserve, just the other side of the railway bridge). Here we have spent time over the past three years improving the river through a mixture of gravel infill, berm creation and planting. A spot where now you can regularly see dragonflies and damselflies throughout the summer, fish fry take refuge amongst the plants and we’ve even seen a Water Rail, not a very common sight in the middle of High Wycombe! See photos below. 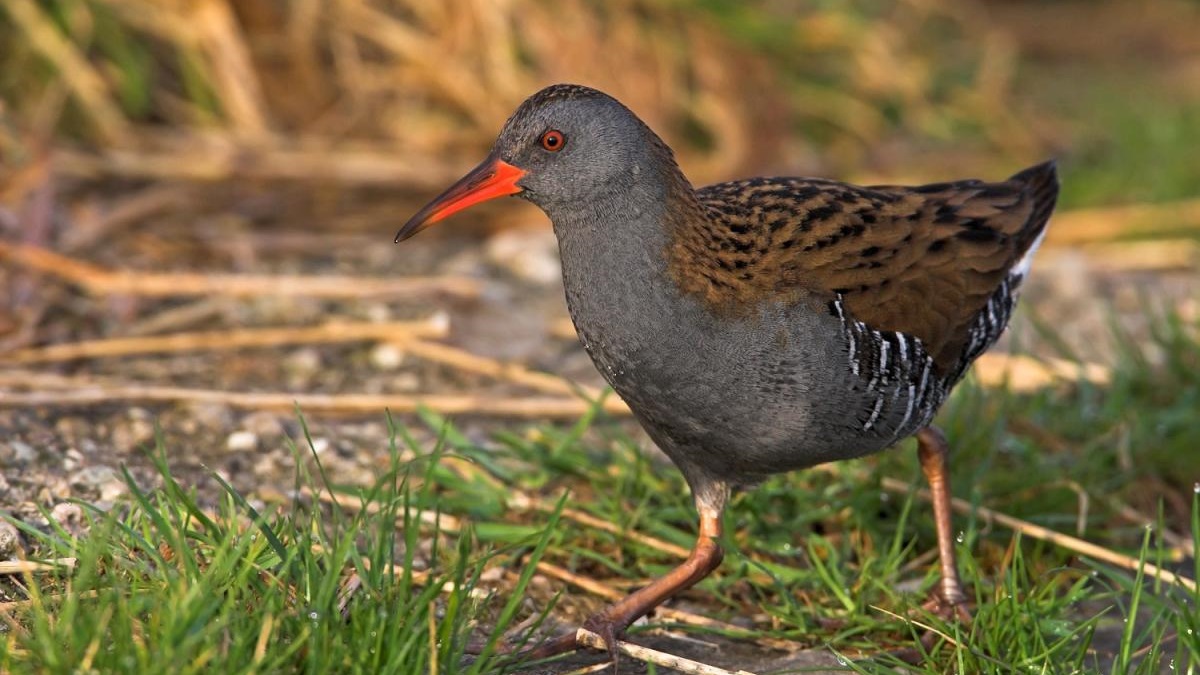 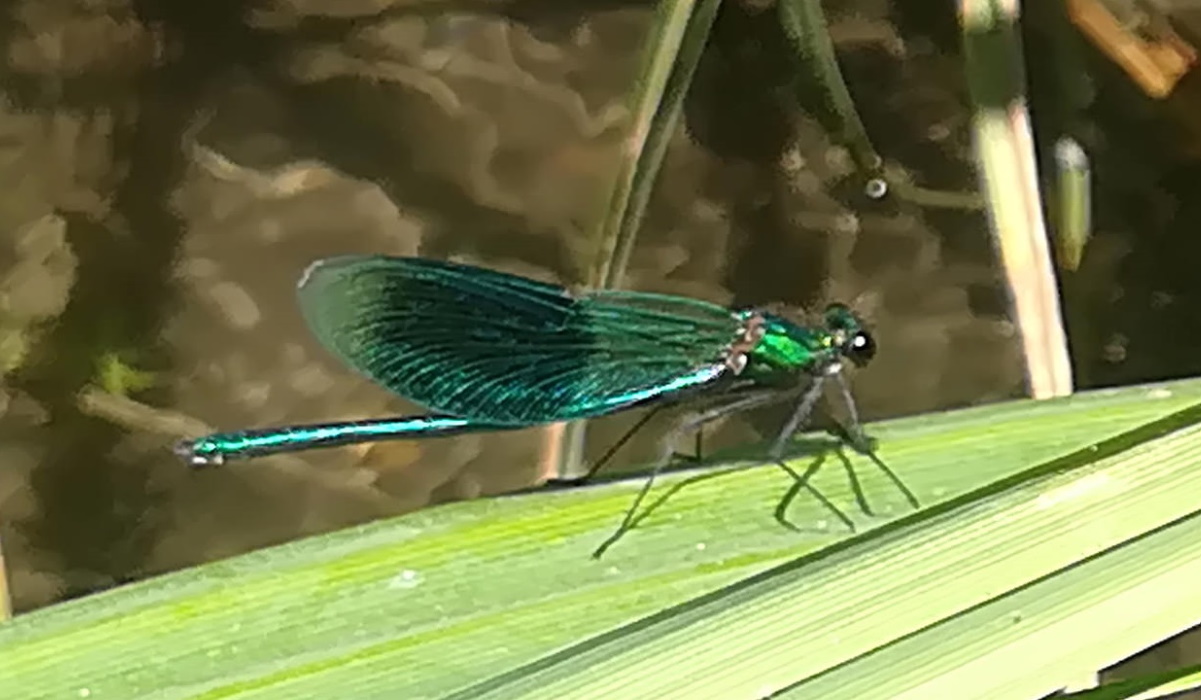 With the work being such a resounding success, we though that we would try and expand the area, connecting and improving the area for wildlife and for anyone who visits the area or is just passing through.

It wasn’t going to be an easy task, we knew that there was a thick layer of silt where we wanted a layer of oxygenated gravel that would support the creatures which would form the basis of the food chain, along with the plants that weren’t spreading due to the site’s shadiness.

The first job was to find some funding, so a big thank you to the Environment Agency and Wycombe District Council who were able to find the money to make the project possible. Next step was to come up with a clear plan of action and thanks to Allen Beechey, the Chilterns Chalk Stream Officer we were able to put a together a plan that was approved by The Environment Agency. Now all we had to do was implement it!

First we needed a lot of wood, luckily we also needed to get more light to the river and were able to utilise some of the trees from around the stream but it wasn’t enough – however when you manage woodlands locally there is generally a plentiful supply of wood, it just needs moving, that’s where volunteers and a trailer come in handy!

With our supplies sorted, we worked with hundreds of volunteers including local residents, Janssen Cilag (Johnson & Johnson)  and even a London based private investment firm to get the work done,. Thanks to each and every one of you that donned your waders and joined us for a paddle in the river.

So, what was the plan? We started by constructing 2 causeways made from brash and logs, all held together with some stakes and wire. This helps to narrow the central channel of the river which increases the flow of the river (a bit like putting your finger partially over the end of a hose pipe) and this helps to scour the bottom of the river helping to move some of the silt. In the meantime an intrepid splinter group went a bit further downstream and removed a temporary weir that had been put in during the development of the Wye Dene Estate. This effectively makes the stretch of the river upstream from it steeper, also helping to improve the flow rate. 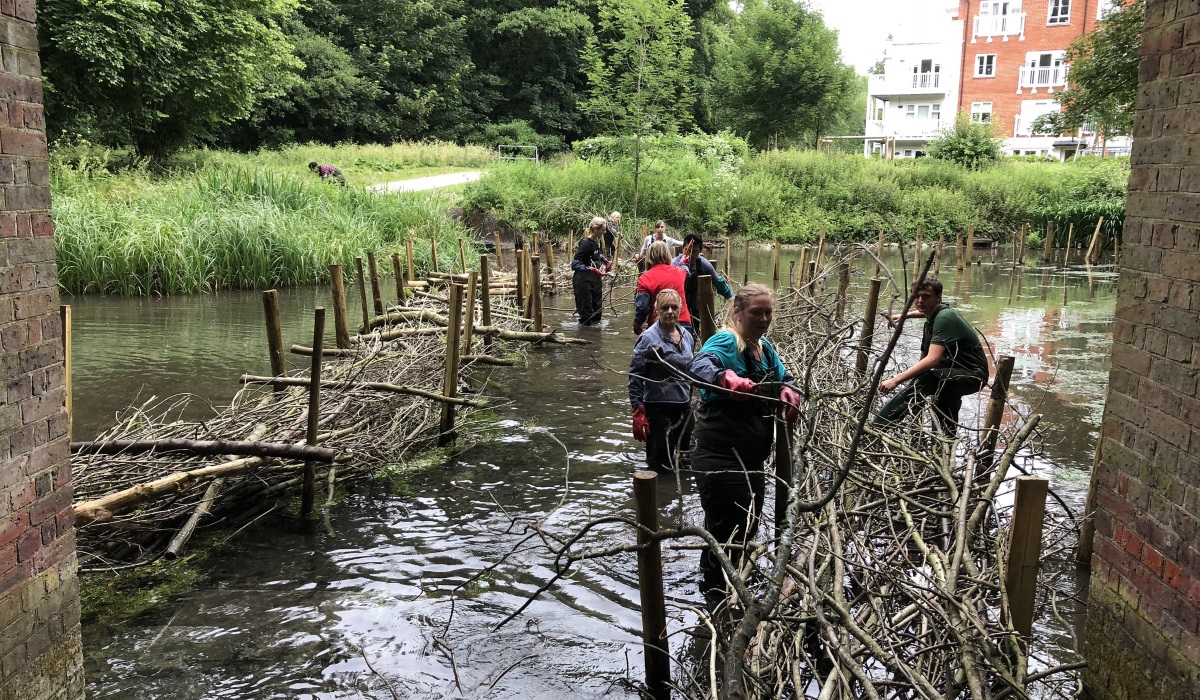 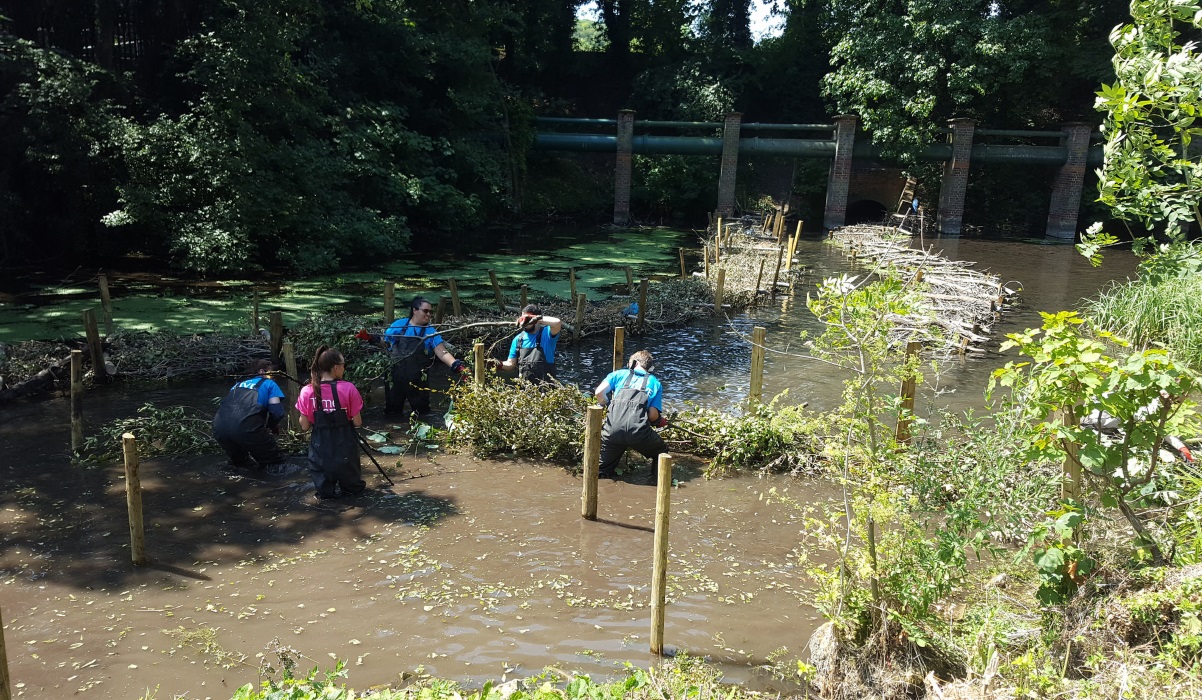 In addition we added 3 berms that effectively make the river bank wider, helping to reduce the width of the river to further increase flow. You may have noticed a potential flaw in all this wonderful work we’ve done, wood rots! There is no need to worry, the branches help to slow down the river flow as the water passes through them. This causes some of the silt to be deposited in to the causeways and berms. Additionally we have added hundreds of plants to the structures, some planted in coir rolls and mats for extra strength and durability. As they grow their roots will help to bind the silt together. Hopefully once the branches do rot down they will have been replaced by a self-supporting planted bank.

We may have finished the in stream works in this section but that doesn’t mean there isn’t a lot more work to do in and around the river. Our intention is try and get as much of the river into positive management as we can. It isn’t a small task, and we certainly can’t do it alone. Some of the work is well beyond our capabilities (modifying weirs, removing concrete channels, re-profiling banks…) but we will continue to do more of the same and have managed to get some further funding from Thames Water to do just that. Some of the money will be spent on contractors to remove a lot of the riverside trees, starting with the trees on the railway bank adjacent to the area we were working on. This also reduces the risk to the sewage pipe, if a tree fell and broke the pipe it would be an environmental catastrophe.  See photo below of trees overhanging the sewage pipe.

We will then replant with smaller species such as Hawthorn, Blackthorn and Hazel, creating a low dense, scrubby area which over time will be ideal nesting habitat but not high enough to block out the light to the river.

We’re already seeing the benefits of the work we’ve just completed with the Kingfisher being seen regularly as well as Herons, Little Egrets, Grey Wagtails and a Moorhen that likes to skulk around on the causeway and fish fry being seen in the main river. There is no magic wand that transforms the whole river in to a wonderful place for wildlife to live in or a place that people want to visit, live or work near but with your help and the support of the many organisations and individuals that have a vested interest in the river we can over time radically improve this rare chalk stream. Undoing the hundreds of years of damage that man has done in his attempt to utilise the river for his own needs.

Many thanks to the Environment Agency and Wycombe District Council for their funding and support.

This website uses cookies to improve your experience while you navigate through the website. Out of these, the cookies that are categorized as necessary are stored on your browser as they are essential for the working of basic functionalities of the website. We also use third-party cookies that help us analyze and understand how you use this website. These cookies will be stored in your browser only with your consent. You also have the option to opt-out of these cookies. But opting out of some of these cookies may affect your browsing experience.
Necessary Always Enabled

Any cookies that may not be particularly necessary for the website to function and is used specifically to collect user personal data via analytics, ads, other embedded contents are termed as non-necessary cookies. It is mandatory to procure user consent prior to running these cookies on your website.